And waiving platform fees for all personal fundraisers

These new features include the following:

Matching Donations for Nonprofit Fundraisers
People often pledge to match donations to their Facebook Fundraisers, and the company wanted to make that easier. For example, David Smith lost his sister in a car accident in 2013, and this year for his birthday, he started a fundraiserfor Mothers Against Drunk Driving (MADD). He told family and friends that if he could raise $100, he would match their contribution. People rallied around the cause and raised $2,360 — more than 10x his original goal.

Facebook wants to help everyone meet and exceed their fundraising goals through matching donations. Now people who create fundraisers can pledge to match donations, directly within the fundraisers tool. Matches can be any amount that they choose, from $5 to $2,500, helping people build momentum for their cause. 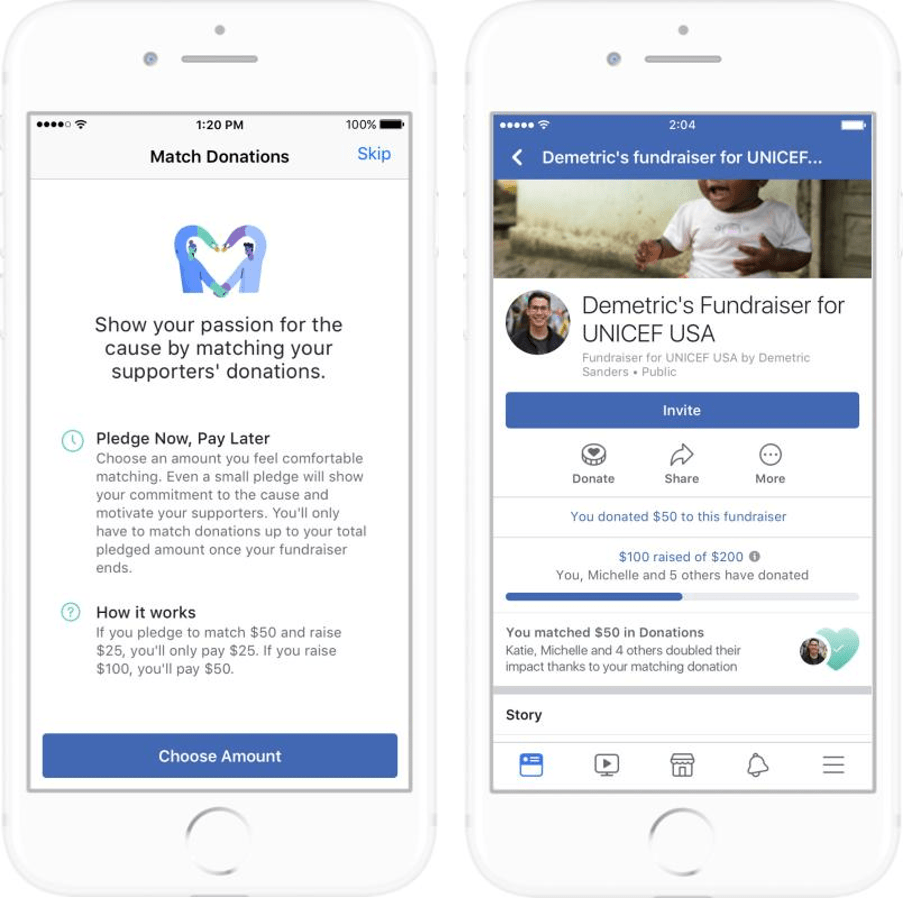 New features for Impact for Personal Causes
People on Facebook have raised money for many personal causes, including loved ones who need critical surgery, teachers needing school supplies for their students, and families in need after losing everything in a fire. They’ve added more categories for fundraisers for personal causes to give people more options to raise critical funds for themselves, a friend, or something or someone not on Facebook.

Based on feedback from the community, they’ve added fundraiser categories for family (like adoption or new baby supplies), faith (like missions or religious community events), travel (like educational trips or travel for medical needs), and volunteering (like volunteer programs or supplies) causes.

There are already examples of people using these new categories, like Lauren Pyskoty who started a fundraiser to support her first mission trip and raised $1,328. These are in addition to existing categories for personal fundraisers: community projects/groups, sports/competitions, education, medical, pets/animals, personal emergency, crisis relief, and memorial/loss.

Asha Sharma, Head of Product for Social Good at Facebook added, “we're inspired by the many ways people have come together to support one another. In the coming weeks, we're eliminating the platform fee on all fundraisers for personal causes, so that people can maximize their fundraising support.”

To create a fundraiser for a nonprofit or a personal cause, visit facebook.com/fundraisers or tap the Fundraisers bookmark on the Facebook app. You can choose the cause you want to support, share why it's important to you, and follow the steps to set up your goal. The company also waived all fees for nonprofit fundraisers last fall at the Social Good Forum in New York City, NY.

“We know people care a lot about the organizations and causes they support. We're grateful for their passion and for the feedback that helps us build better tools to help them reach their fundraising goals,” Sharma added.